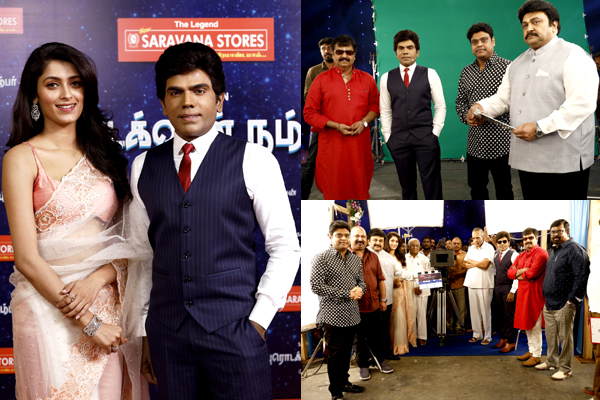 The camera’s will start rolling for this grandeur saga, produced and acted by Legend Saravanan, written and directed by JD & Jerry, on 01 Dec 2019, at AVM Studios, Vadapalani with the blessings of the Almighty, with Thiru. AVM Saravanan lighting the lamp and Ace Director Thiru. S P Muthuraman inaugurating with the clap.
Legend Saravanan plays the lead with Geethika Tiwary who also debuts alongside in this movie, music scored by Harris Jayaraj.
This grandeur saga has the likes of Prabhu, Vivek,
Vijayakumar, Nassar, Thambi Ramiah, Kali Venkat, Mayilsamy, Latha, Kovai Sarala, Devi Mahesh, who along with many popular artistes play important roles.
It is also said that another popular heroine will also play a critical role in this movie.
Velraj is trusted with the Cinematography, SS Moorthy with the Art, Ruben with the editorial responsibilities, while
Kaviperarasu Vairamuthu as written the first song. Pattukkottai Prabakar has written the dialogues.
The movie is planned to be shot at some of the exotic locations of the world, besides Chennai, Pollachi, Himalayas and a few overseas locations.
The cue from the Director Duo JD and Jerry about the movie is “Expect the Unexpected”